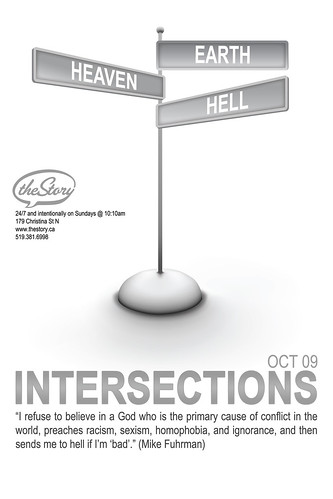 In the words of a distressed George Costanza, from a now famous Seinfeld episode, “World’s are colliding Jerry!” Who knew such a profound theological statement could come from a 90’s sitcom?

Worlds are colliding – Heaven and Earth; Hell and Earth. Daily. Each realm leaves its mark on our planet, and as humans we become the vehicles for the arrival and departure of both. Thus from this vantage point, Heaven and Hell are more present day realities than post-death destinations. To focus on the future at the expense of the present would be missing the point completely. So with this shift in perception, as Christians, we move from being escape artists to renewal artists.

Deeper still, any thoughtful conversation about Heaven and Hell eventually leads to a curiosity around God’s credibility and character. On a good day, God appears to be a hero, saving the day for helpless humanity. Hymn writer Fanny J. Crosby put it this way:

To God be the glory, great things He has done;
So loved He the world that He gave us His Son,
Who yielded His life an atonement for sin,
And opened the life gate that all may go in.

When you set the table
and when you chose the scale
Did you write a riddle
that you knew they would fail?
Did you make them tremble
so they would tell the tale
Did you push us when we fell?
What am I afraid of?
Whom did I betray?
In what medieval kingdom does justice work this way?
If you knew what would happen and made us just the same
then you, my Lord, can take the blame

It’s going to be an interesting series to say the least.

Be sure then to be part of our Sunday gatherings this October as we talk about “Intersections: Where Heaven, Hell & Earth Collide”